by IWantABoa
Hello again, all. As my name suggests, my goal is to get a Boa but right now making money is just "milk running" from Ensoreus to Ararus and back, doing that a bunch of times. Gets boring and is quite slow, although I do get a decent amount of money (least being 2k credits). Any one got any suggestions? I don't want to cheat as that'd make the game too boring, but I would like tips and tricks. I feel that, I have indeed learnt most of what there is to this game, but haven't seen any "missions" in the vanilla game. I would appreciate any suggestion, actually. My current ship is a Cobra MK III, selling for ~130k credits(underwhelmingly low amount for the beast).

by montana05
Well, it will depend which carrier you got in mind. The beauty of Oolite is that, thanks to 100's of expansion packages you could create your own universe. I started as a smuggler, did some milk-runs and finally ended up as a mercenary. Nowadays I am working for the Galactic Navy and visit permanent Spacebars to get a target to kill. Galcop most wanted takes more time but could also give you a nice income.

I did fly a Boa before, to be precise a Boa Mk2, it was not my ship of choice at the end. I love my Caduceus, big enough to trade and well armed to neutralize any enemy. Unfortunately its an ueber-ship, specially with all the additional equipment I got from the Navy

by GearsNSuch
I’d personally recommend saving up for a Python first. It’s not as good as the Boa, but it does allow you to get a feel for the life of a trader and take on high paying cargo contracts. In the meantime, try installing a couple passenger cabins on your Cobra. Passenger contacts will earn you a good deal in no time at all.
Happy flying!

by Cody
Parcel delivery contracts - work your rep up, and they become quite lucrative. And they use no hold space, so you can trade as you go.

by Malacandra
The trouble I found with trying to earn enough credits to buy a Boa CC -- a ship I flew and enjoyed in a previous version of this game, and it must have been about six years ago because it inspired the "Captain Hammond" stories -- is that running passengers and parcels attracts pirates and assassins like flies to the southern end of a northbound bull, and since the game has now become structured such that the one true way to win a fight is in a close-quarters test of fast reactions, I get very, very tired of spending what seems like half an hour constantly twisting and turning to keep the bad guys off my tail and trying to get a kill shot on something that also twists and turns about a second after I finally get my sights on.

I mean, I have other calls on my time, so I can't honestly claim that this is the only reason I haven't played this game in so long that I've lost count, but it's part of the reason -- because when you're up to your arse in alligators, if you muck up ever so briefly you find yourself shipping enough hits that you can kiss a ton of equipment goodbye, and there goes all the profit.

by IWantABoa
As a matter of fact, I am saving up for a Python. It seems like getting 400k with just 35 tons of space will take ages, so yeah. I'm pretty sure there are reputations for cargo contracts, passenger contracts, etc., right? I want to know how much a person could make if he has the highest reputation. I saw someone mention making 80k from a single passenger contract

and I will consider parcel delivery contracts too. About the spinning and turning, Malacandra, while I was playing around with a Boa in an illegitimate save, I found it to be faster than the Cobra Mk III, so I don't think I'd have issues with that.

by Malacandra
Oh, the Cobby's got the turn performance, but I don't. I can keep from being hit in a furball, but I can't acquire a target and burn it quickly enough -- or at any rate, not reliably enough to be sure of putting a whole gaggle of bad guys to sleep in a reasonable time, and after what seems like half an hour of keeping them off my tail, I start losing patience. And at that point, everything goes south.

IWantABoa wrote: ↑
Sat Jul 06, 2019 3:49 am
I'm pretty sure there are reputations for cargo contracts, passenger contracts, etc., right? I want to know how much a person could make if he has the highest reputation.

Right! Top-ranked parcel couriers can pull this sort of payoff: 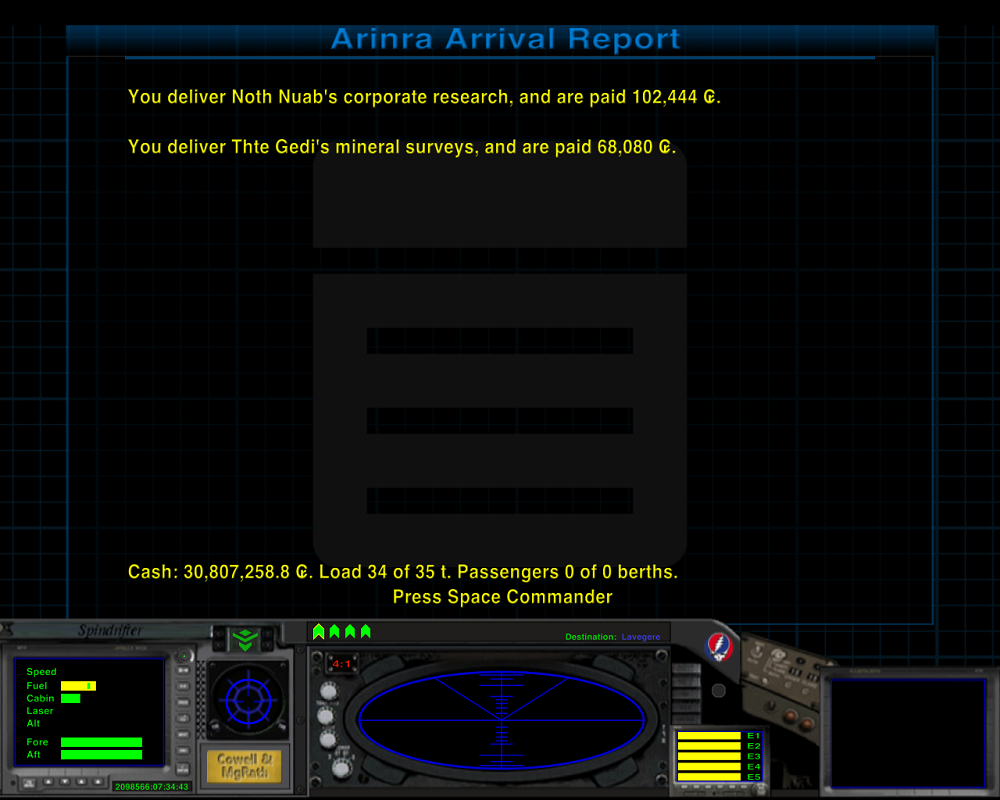 As mentioned, there are risks - some types of parcel will attract unwanted attention.

by IWantABoa
Woah! How much do I have to grind to get that much

by Cody
There's always a grind of some sort. <grins>

Payoffs like the above aren't too common, and the 100k one includes an early delivery bonus (which is not guaranteed) in excess of 40%
A more usual cross-chart run (with base amounts) would look something like this:

by Disembodied
It's worth pointing out that the highest courier reputations aren't earned solely through grinding; there's quite a lot of zapping involved too. Valuable documents can attract unwelcome attention …

by Cody
Oh yes, plenty of zapping! And as the contracts become tastier, so does the opposition.
An aft laser, and the ability to use it effectively, can be very useful, if not essential.


Installing the Skilled NPCs oxz is not recommended, but can add to the fun.

by IWantABoa
With ~360 kills claimed to my name, zapping is definitely something I can handle

I decided that staying away from OXPs that make you a lot of money would be better because I wish to enjoy the game more. I want to take things rather slow(contrary to the subject) because I'm at a loss of what I would do after becoming crazy rich. Do you guys have any suggestions for that case?

by Balisongdalo
I'm more on the combat side so my recommended oxp's would be Towbar for making good salvage money, thargoid extermination contracts on the BB and Random Hits taking only the highest paying contracts. I tried Galcop's Most Wanted but it still seems buggy when finding your target so I skip that. Since you like to fight, I think you'll find these to your liking. Supplement this with some trading and money shouldn't be an issue. If you want your ship faster, try Feudal States and do a few Hunting Lodge duels. I only use this to buy or try a new ship, but after that earn credits through combat. Uber ships are easy mode IMO, since the turrets do all the work and kills for you. Kit yourself with multiple lasers and bombs for those big fights and your good to go.

by ffutures
There are cheaper OXP alternatives to the Python that give you enough cargo space to start making money. I particularly recommend the D.T.T. Planet Express ship, which costs CR 100,000 - it only takes 30 tons of cargo but that's just enough to start earning real money, and has the advantage of being fast even when mass-locked. Not the best gun platform for various reasons, but a lot of fun to play with.