This is a tool for working with planet textures. Most usefully, it can convert lat/long textures to cube maps. A typical invocation:

I have noticed two bugs:The geometry is correct, so it’s good enough for testing, but not deployment.

The colour issue is fixed. There will probably be a new release tomorrow.
E-mail: jens@oolite.org
Top

As a new Oolite user, can you tell me what this tool is used for?

SiriusCG wrote:As a new Oolite user, can you tell me what this tool is used for?

It's for the current trunk version, which recently got a new ability to handle cube maps, for planet textures.
JazHaz

Maybe you could start a Kickstarter Campaign to found your £4500 pledge.

Thanks to Gimi, I got an eBook in my inbox tonight (31st May 2014 - Release of Elite Reclamation)!
Top

SiriusCG wrote:As a new Oolite user, can you tell me what this tool is used for?

As a user, not much. If you’re making OXPs with planets or custom shaders, a wide variety of uses are possible. :-)
E-mail: jens@oolite.org
Top

You can find here some lat-long maps of planets and moons from our solar system to experiment with.
UPS-Courier & DeepSpacePirates & others at the box and some older versions
Top

And lots of Earth from NASA’s Visible Earth.

They have an Invisible Earth too, but I can’t find it now.
E-mail: jens@oolite.org
Top

Is there any chance one of you complete geniuses would consider turning this into a Photoshop Script or Plug-In? Is it even possible?

Also - If I've got a latlong in 2048 x 1024, and want to maintain that level of detail, what output size do I need to specify?
Find my OXP's at:
Deep Horizon Industries - Your Planet Our Design
Top

Cmd. Cheyd wrote:Is there any chance one of you complete geniuses would consider turning this into a Photoshop Script or Plug-In? Is it even possible?

From what I hear, making Photoshop plug-ins is extremely painful, which is part of the reason only professionals do it. Another reason would be the need to have several versions of Photoshop for each target platform.

A script might be possible, but would be many times slower.

0.4.2 released; first post updated. This fixes some bugs with the more obscure options.

Also, to save myself the trouble of writing a comprehensible guide to command line tools, I wrote a graphical version for Mac OS X. 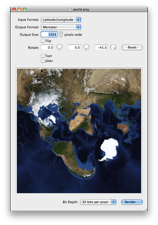