An area for discussing new ideas and additions to Oolite.

Shouldn't it be a nice idea to OXP some Q-worlds (TM) Terraforming ships? The idea behind it is that this are very large ships containing all the ingredients to establish a so called Terraforming Grid on a planet.

Such an OXP could contain the following ships:

Of course with all the shaders and Normal maps and the nice Q-Worlds(TM) logo.

That's a great idea, I suppose after the initial colonisation naturaly habitable worlds would have eventually been used up. Any chance of catching the Orbit cannon in action?
Top

ZygoUgo wrote:That's a great idea, I suppose after the initial colonisation naturaly habitable worlds would have eventually been used up. Any chance of catching the Orbit cannon in action?

I forgot to mention that it's meant as a NPC OXP.

But what if an orbit canon falls into the wrong hands?

What if pirates stole an orbit cannon carrier and threaten to take out the station in one shot? Thats their definition of 'Terraforming'

(it's that powerful due to the high power outputl)

But what I look for is like the Galactic Navy OXP that places carrier groups but then with Terraforming ships. Then I can 'decorate' my latest Famous Planet Rilace with the ships in orbit around the planet.

The scale of the canon ship would be enormous.
For P.A. Groove's music check
https://soundcloud.com/p-a-groove
Famous Planets v 2.7. (for Povray)

Yes it should definately be non player, I have an idea for a similar kind of organisation who appear randomly in systems where heavy solar activity would be simulated, a sort of scientific observation/emergency vessel.

I suppose a giant chunk of ice wouldn't mash the stations sheilds completely but could certainly knock it dangerously out of orbit?
Not sure what you're planning for that.
The cannon ship could have two parts, the front obviously being the gun and freezing unit (some vents with icy steaming drifting out could be cool

), the second half being the giant water tank. Sometimes when you arrive in the system this part is gone and the cannon doesn't fire atall, it is considered to be off at the next system/supply where such vast quantities of water can be refilled.
Is there any way of collecting water chemically/converting it from space/other energy/nebula's? Could have some kind of strange looking water harvesting units for this.
Realistically I suppose icy asteroids would be collected from local feilds and tugged to the cannon where they would instead be broken down into safer/more manageable sized shots than what you are proposing (that sounds pretty dangerous

).
Maybe the cannon ship has a section that compresses the ice into a super dense form, making it smaller and safer for shooting into the planets atmosphere (so it mostly melts on the way in), but still dangerouse to a stations energy sheilding?
It depends if you want to get all feasable about it or if you prefer the idea of giant cannons

As for holding a planetary city to ransom it doesn't have to be ice in the cannon, seems appropriately piratey!
Top

Pretty sure you can't compress water like that (or indeed any liquid) - one litre of water takes up one litre of volume no matter what you do with it (await correction or confirmation).

Some good ideas for this ship though - can't wait!

Thought: Just "make" the water - two huge tanks - one filled with compressed hydrogen (or sucked in from surrounding space) - one filled with Oxygen - huge power generator and spark them together - hey presto (more or less) water - ready for freezing and forming into watery slugs of destruction/terraforming.

Also - huge tanks of hydrogen and oxygen would make for some lovely q-mine style explosions should somebody decide to have a go at them...

Hi Daddy Hoggy, thanks for taking an interest.
No reply as such so he's probably happy with how he's got it figured, I was going to do him some sketches in my quiet moments....never mind.
It's a good idea, look forward to some screenies

I was not replying because of big time update problems here (of Topic mode on): I bought GTA4 today. Therefore I have to update to Service Pack 3. But I get errors on install. So now I'm trying the solutions from the M$$$oft support forums. (of topic mode off)

But I also have connection problems to the Internet.

But to relax I've read this topic. To make things clear. I'm not going to do this topic because I cannot (currently model in Wings 3D an I'm not planning to invest much time into it into the near future as I'm busy texturing etc for the Famous Planets Pack. But maybe other shipbuilders may find it a challenge to build such a ship. To be clear. Ice meteors are not consisting only of Ice but they contain Ice. But I like the tank idea. Pleas post your concepts of such a ship. I'm very interested
For P.A. Groove's music check
https://soundcloud.com/p-a-groove
Famous Planets v 2.7. (for Povray)

DaddyHoggy wrote:Pretty sure you can't compress water like that (or indeed any liquid) - one litre of water takes up one litre of volume no matter what you do with it (await correction or confirmation).

Some good ideas for this ship though - can't wait!

One kilo of water, however, takes different volumes, depending on its temperature. The optimal (lowest) volume being at 4°C.

Of course pressure is another component. So perhaps if the terraforming ship would carry a small neutron star, or even black hole? Then everything around it would be compressed quite neatly.

(Of course it would all be compressed to neutrons, so you couldn't really call it 'water' anymore.

Another nice idea which is around (I think) since 'Leisure Suit Larry Goes Looking for Love (in Several Wrong Places)' is dehydrated water. It's a powder that takes almost no volume at all, so you can carry large quantities of it. Works like any instant beverage: If you want to use it you just have to mix it with water.

The Story — The Career — The OXPs
Top

The ship shown in Frame's post yesterday in the screenshots topic (http://aegidian.org/bb/viewtopic.php?t=4494&start=435) might be an ideal candidate as the terraforming ship - that big central tower could be the 'terraforming projector' mounting - imagine the ship hovering above a planet with that pointing straight down at the planet...?

...and yes, water is incompressible - that's the whole principle of hydraulics!

Never got round to playing Leisure Suit Larry, joined Abandonia recently though...

@Star Gazer; yes it's definately got the look of a science vessel but more on an observational level I think, plus it looks too well funded, maybe a Naval research vessel? It's from a film or series I think?

@Commander McLane; Took that on board so went looking for possibilities, currently my idea I'm putting forward for discussion is this, instead of collecting water the tanker section fills up on oxygen and hydrogen, which it freezes (using pressurised helium, is that right?) as these components are piped in. The hydrogen and helium are collected by a specific farming tanker from around the star local to the planet that is being tarraformed, whilst the main tanker heads back to Q-Worlds HQ to harvest the oxygen, which is infact a planet.*(Note on this at end)
This main tanker's container is actually two, the other half of which will be filled with the frozen hydrogen by the secondary tanker when it returns to the active project, after which it re-attaches itself to the back of the main vessel, co-joining it's factory section. (The secondary tanker may dock and tops up the factory's helium supply, if needed, before filling the main tanker with the hydrogen)
These components will be used to make disks, the centre of which consists of the frozen hydrogen, encased within the frozen oxygen. As the disks enter the atmosphere the oxygen begins to melt first, delaying the reaction of the hydrogen until they are far enough into the atmosphere that the resulting products wont just float around in the stratosphere (is that true?). Obviously there is a huge explosion vaporising the disc and scattering water mist into the air.
This is partially done for safety reasons so that these discs never reach the planets surface and cause explosions or disruptive waves once there is enough water.
Sorry if there's wonky guess work science in that, correct me!

Here's some dodgey scribbles, I'll do some for the tanker/s and the ships joined up at some point, they were only quick so it's abit ugly at the mo..

* The Q-Worlds HQ was initially bought as a dead world from the systems government who sold it to them for a piffling sum, not knowing that it was for Q-Worlds but were easily mislead in to presuming the buyer was a half baked entrepenuer they had just conned. The planet was deemed worthless under a mining ban of the kind slapped on worlds so heavily scarred by activity that they are in danger of becoming unstable in their orbits due to weight change, and their surfaces prone to collapse and dangerous tremors as the gigantic gaping holes in their crusts collapse.
Once the deal was signed this goverment had to sit by and grind its teeth in silent fury as Q-Worlds turned it into a lush and never ending forest populated with every imaginable endangered species of plant and animal, receiving a preservation order from every race of notable conscience.
A large amount of funding is also received from charity organisations to keep these species safe.
This is their oxygen farm where huge tanks are kept full of the refined gas in readiness for the fleet of tankers to ship it out to the factory, (of course this is only if the world lacks water in its eco system).
The tanks are winched up to a refrigeration station in orbit where they are liquified and attached to the tankers.

Out of interest Q-Worlds also increases it's funding with a tourist resort in an unnaffected area of the planet, so this minor side industry demands the running of several cabaret acts, known as 'Breath Deep', but to more ingrained and long running staff, 'Don't Hold Your Breathe'.
Top

I wasn't much online this week. Saw your concept drawings. I like them. Makes me think of starting a thread ' put your ship concepts here' is that an idea. I that way people who cannot model can still contribute with visuals of their own ships. OXPers could draw ideas from it.

Good idea for a thread, it's a bit of fun isn't it

I look forward to seeing Homer's design!
Out of interest here's the sketches I did for the Solar Event vehicle, have done a different version for Q-Worlds but I'll re-draw them and put them together before I post it. I'd come up with a bit of back story but I'm too hung over to think straight 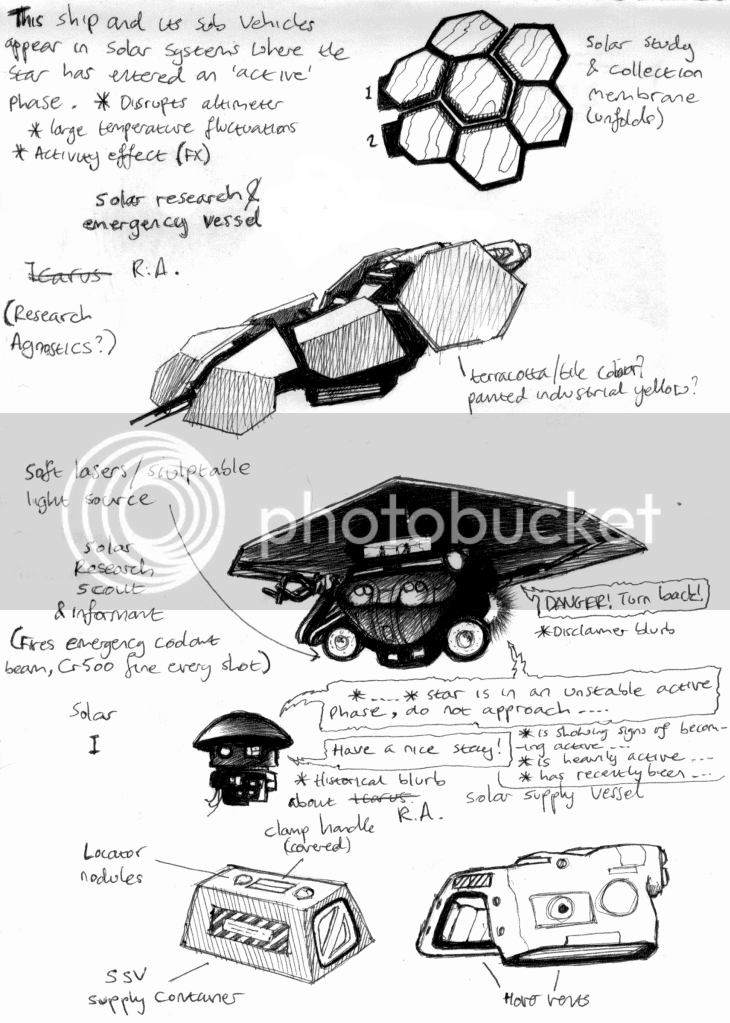 Edit; It's probably a good idea if people include a list of scripting requirements for their design if they are posting something they're serious about, in order for those who know about such mystical matters to point out what is and isn't possible, or to talk about ways of acheiving a near as possible work around.
Top
Post Reply
14 posts • Page 1 of 1