No, not King Ghidorah,awesome though he is. Good try, though.
Commander Smivs, the friendliest Gourd this side of Riedquat.
Top

I think this is a definite: one clue too far!!!!

I assume it was the award hint?

He was called Hugo the Rat by a number of authors whose stories were placed in his magazine, on account that he tended to pay little or even nothing for them! Yet others regard him as Father of Science Fiction.

I'm just glad that his term (Scientification) didn't make it as term for SF.

You are the winner .... but just by the breadth of a slice of a micro-second!!!!

So the CismoFiCo is on its way to you, with a half empty Anaconda in tow.

amazing as the clue was , i just googled Luxembourg and sci fi and he came up straight away... but i thought i should stay in rehab for a little while longer. that Evil Juice can take a toll on a commander.
Arthur: OK. Leave this to me. I'm British. I know how to queue.
OR i could go with
Arthur Dent: I always said there was something fundamentally wrong with the universe.
or simply
42
Top

I know that feeling.

Flying The Sizzlin' Suzie VI, a trusty and venerable Boa Class Cruiser in Oolite 1.84 on

Time for a clue?
cbr was in the right area - this is a creature not a ship/device/artifact, and comes from film but it pre-dates the Godzilla gang.
Commander Smivs, the friendliest Gourd this side of Riedquat.
Top

Nope! This beastie is not Japanese.
Clue the second :- It is thought to be 17,000,000 years old.
Commander Smivs, the friendliest Gourd this side of Riedquat.
Top

Then it must be 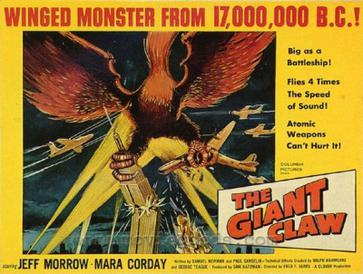 Ta-da!
Yes it is. Well spotted, and over to you.
One of the most laughable B-movie monsters of all time. I remember watching this years ago very late one night, and almost making myself sick with laughter every time it appeared.
Apparently the SFX and model were farmed out to a Mexican firm as they were the cheepest, and critics of the time described the effects as 'falling short of expected industry standards'. These were the standards of 50's B-movies that they fell short of!
The whole film is on YouTube for those that are interested, but the cinematic trailer probably tells you all you need to know.

Commander Smivs, the friendliest Gourd this side of Riedquat.
Top

Looks like the dialogues are even worse than the sfx....
Top

This should be instantly googleable, but some might be able to do it from memory: why might you be concerned about excavations in Hobbs Lane, London? Knightsbridge, W10, to be exact - on the Central line …
Oofiction: Calliope: a Captain Hesperus adventure | Stranglehold: a Captain Hesperus adventure | Local Midnight in the Vacuum Bar | A Farewell to Arms, Legs, etc.: the Blaze O'Glory Story
Top

From memory, Quatermass and the Pit - insectoid aliens?
Give me five, I'm still alive
Ain't no luck, I learned to duck
Top

As a kid, the Quatermass series/films were excellent stuff. Were the insectoid Martians locust-like in appearance?

Anyway, staying with vintage tales concerning Mars: in which novel would you find intelligent winged critters?
Give me five, I'm still alive
Ain't no luck, I learned to duck
Top

out of a silent planet. by C.S.Lewis
Arthur: OK. Leave this to me. I'm British. I know how to queue.
OR i could go with
Arthur Dent: I always said there was something fundamentally wrong with the universe.
or simply
42
Top

Clues: a spaceship succeeds in landing on Mars, but is damaged in the process and unable to return to Earth, so a rescue mission is hastily organised.
The author was very well known, especially in Britain - but not for his fiction.
Give me five, I'm still alive
Ain't no luck, I learned to duck
Top
Post Reply
5842 posts