I'm pretty sure older versions didn't have this problem, so I may ditch the looks and just keep the logic of the new one.
Top

Try checking what the actual bounding boxes and octrees for collision detection look like and see if something seems out of place. You can display those using the debug console and executing the command

is the dock an untextured model of some sort? i think it is. could the solution be to make the dock box larger? or maybe center it a bit better?
Top

I think the docking is related to being in a certain place which initiates the procedure, just like those refueling stations.

Here is a picture with the actual bounding boxes as per another_commanders code. 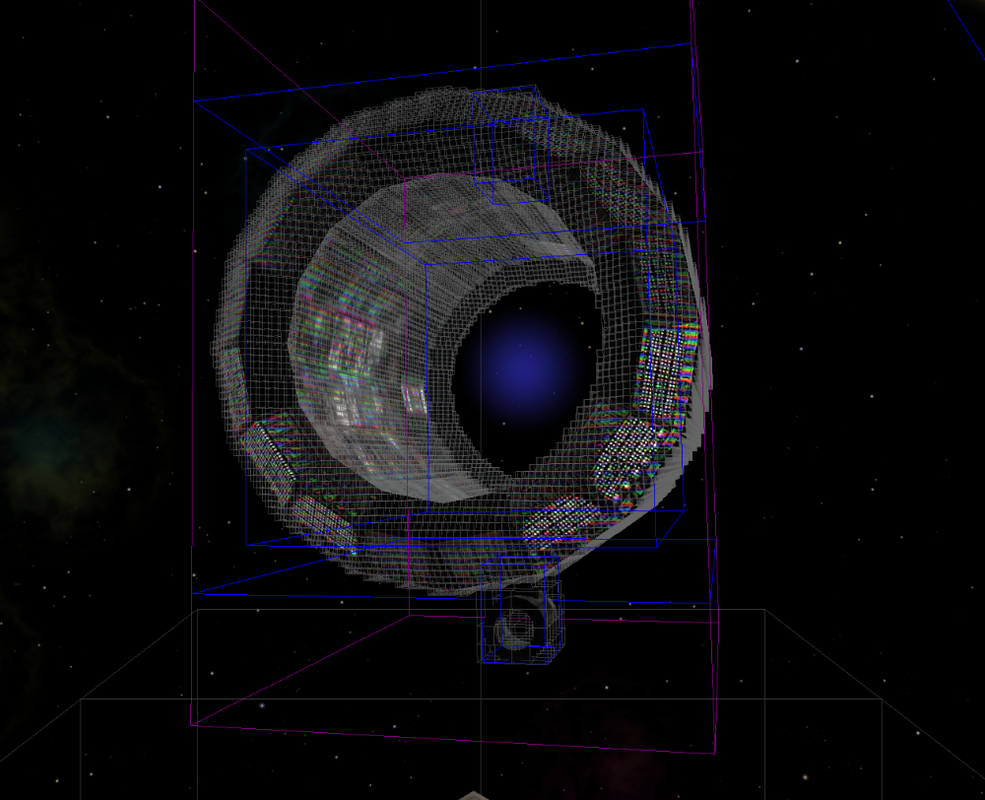 hmmm, well it doesnt look like there is anything physically there to hinder a ship.
Top

Then the most likely explanation is the model's graphics are simply not lined up with where the game thinks the "solid" parts are.
Top

Superhub v1.5 OXP does not have this problem.

It seems to use the smaller textures and lacks a defined docking port piece.
Top

So this is a really stupid question, and maybe off topic. How do I actually get docking clearance approved? Whenever I request it, I always get a denied response.
Top

Are you fugitive?
Top

Are you using the Super Hubs for Extra Planets OXZ ?
Humor is the second most subjective thing on the planet

This is a recurring problem for others, too. I discovered this anomaly both before I added in Superhubs for extra planets - and after that too! And no, I'm not a fugitive (never having had to live in a communist or a fascist state, thank heavens!).

Also, the superhubs markets do not show up on Market Enquirer - even when they are the sole orbital station around the second planet in the solar system.

So why do these perverse peculiarities appertain to solely to Superhubs?

Benedict has hypothecated that these Superhubs might actually be emergent independent states and that the poor benighted solar systems which contain them are verging on a breakdown to anarchy. Their utter refusal to respond to gentlemen of quality and provide suitable accommodation to moderate requests indicates extremist political leanings, which need treating with a hefty dosage of disinfectant before things get worse. Why have Galcop not intervened and put an end to such shenanigans? WHERE IS GALCOP?

But why is it just superhubs which display these perverse tendencies? Benedict has argued that it is the psychological effect of living poised around an abyss - that the vacuous nature of such cylindrical habitation affects the corpus collosum in such a fashion as to stimulate the search for a supremely strong bedrock of fanatical devotion to a fundamentalist political creed such as one finds in Bolshevist and Fascist tyrannies. The sempiternal revolution of the cylinder induces an affectation for similar revolutions in one's socio-political circumstances in the existential search for certainty, inhibiting one's appreciation of more stable gubernatorial arrangements such as feudalism.

Presumably, if one can inhibit the revolutions of these superhubs, then despite the engendered tendencies towards political extremism, the desires for these highly inconvenient unilateral declarations of independence will be inhibited and they will again be available for trading and docking.
Denizen of the Dark and Dismal Deserts of Digebiti.

In Super Hubs for Extra Planets there is a missing subentity_key in each of the four Super Hubs listed in its shipdata.plist. This prevents those Super Hubs from accepting docking requests. It also generally prevents docking should you have Docking Requests set to being required. Naturally it is the "Dock" subentity_key that is missing hence the problems. If you are handy with a bit of .plist editing add the following subentity_key to each of the four Super Hubs listed in the aforementioned shipdata.plist. That is you have to add the following code four times in four different places. Reads as being complicated but if you have a look at it you will find it rather easy. Just look at the other subentity_key entries and you will find where and how it should go.

If you want to take it one step further then read on. In the original Super Hub OXZ (not Extra Planets) shipdata.plist at around line 100 (notepad++) you will find an entry for pagroove_superhub_dock that reads as follows.

What you want that line to read is the following.

This second change is not really necessary to get the docks to accept your Docking Requests but it is a nice thing to have since the dockingAI.plist was added to the game after the initial release of this OXZ. Just to be clear the original Super Hub OXZ is needed in order for the Super Hubs for Extra Planets OXZ to be functional.

There really should be an updated release of these OXZs with the needed changes but my license foo is not what it should be so how to proceed is unclear to me. Advice on how to proceed or someone else doing said release would be much appreciated. Could do a new release myself but there is a lot of other tweaking that has been done to these OXZs for my Ooniverse and where to stop between functionality and tweaked stuff might become an issue. Nobody ever said the life of a code tweaker was an easy one. Just enough knowledge to get myself into trouble but not enough knowledge to actually make stuff from scratch.
Humor is the second most subjective thing on the planet

I'll have a stab at this - thank you for the instructions!

Personally speaking, I'd be perfectly happy with your own personally tweaked versions (unless they come emblazoned with swastikas or hammer & sickle logos - I don't think that I could cope with Benedict's smugness at having one of his theories proven correct)!
Denizen of the Dark and Dismal Deserts of Digebiti.

It rather looks as though my stab backfired.

Editing the original Pagroove .oxp was a doddle, whilst with Norby's extra planets .oxp the dastardly deed required some inspired guesswork.

When I'd finished stowing everything away where it was supposed to go, I got the following message on firing up: that neither had a valid manifest.plist and that neither could be loaded.

I'm stumped. But then I was stumped before. But at least this time I got to unzip and rezip prior to restumping!

Whither next, O Magnificent Maestro of the Machiavellian Marmalisation of .oxps?

And, on a minor note - why is the manifest.plist involved in all this malarky?
Denizen of the Dark and Dismal Deserts of Digebiti.